With every move, you get to meet fantastic people with amazing personalities, and with every move comes a challenge. We view every move as a learning experience. With each move, we look at our history and repeat what has worked and learn from what hasn’t. Complacency has not set in, and as long as John Ferguson is running things, it never will.

Whether you intend to move west or back east, there’s no place in the lower 48 that we won’t go.

A Message From the Owner 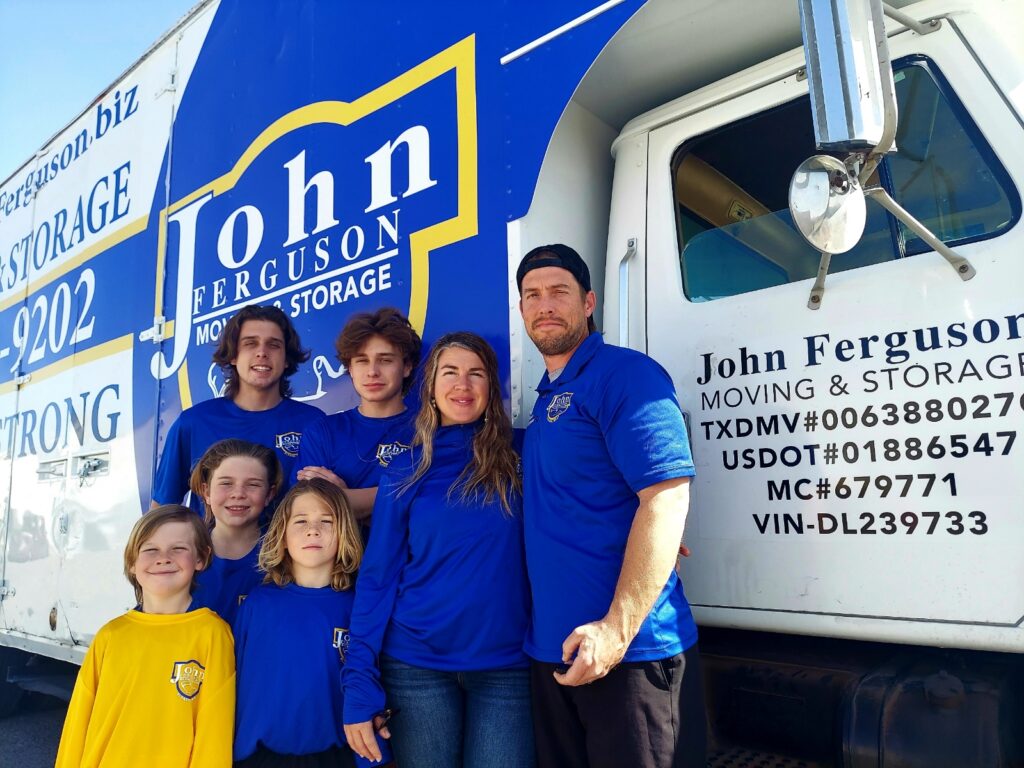 Technically I can’t say we are family owned and operated business, since my wife is too busy with that bunch you see here. So we will just have to go with Locally Owned for now. I love the Moving and Storage business. Like many lines of work, this one does not disappoint or fail to teach a man (and let’s not forget his family) how to persevere and to keep going forward no matter how tough it gets. Quite honestly a lot of people that I meet when I am out on the moves are surprised to learn that I am the owner of this moving company. They say things like, “wow, you are much too young to own a business!” Or, they’ll say, things like, “How did you end up doing this?” Or my absolute favorite, “Did your dad start the company?” Ultimately it all makes me feel super good. What else makes me feel supergood is completing a big job flawlessly. I like to hear that I or we made it look easy. Occasionally, I will take one or both of my teenage boys (that’s an old picture) on a move so they can begin to see what it is like to do what I do. I guess they will get that one particular question one day when they are out on a job without me (cherish the thought) and say, “yep my old man started this empire way back when.” It is fun to think about. Also, when I bring my boys on moves, people are usually super surprised to find out that I have 5 sons altogether. Yeah, I know…you read it right…FIVE. It sounds like a crazy lot. And it is! (Hmm…maybe they should get into the hamburger business). One of these days, though, I’d like to do a job with all my sons. That will be a momentous event. One for the books.

My first two boys I gave some unusual names too, since I was a relatively young dad by today’s standards. I was 23 when my first boy was born. His name is Titan. I love that name. My second boy is Atlas, love that one too. Pretty fitting for a mover, right? They will be the premier movers of El Paso one day…Or they might do something completely different. I am not going to coerce or compel them, but I can dream, can’t I?

Anyway, there is always a discussion, believe it or not, between the boys as to who will one day take over the business. Atlas suggests I branch out and assign each one of them their own location to run. I like that idea. This way when you, the customer, are moving long-distance there can be a warehouse for temporary storage along the way, overseen by an extension of myself. You can’t beat that! So, if you move west or you move east we can do a super good job of maintaining the Ferguson touch all along the way. It’s every father’s dream to incorporate his very own united band of brothers into the family business. All my sons would be truly allied and a major force to be reckoned with since they were groomed from the womb to MOVE like no one else. I truly hope that one day I can dispatch all my sons in a couple few trucks. I could break them up into two super good teams. Two men and a truck or a three-man with a semi and a van. Or they could each take their own truck and crew. They will be some super legit movers. They will certainly be some elite moving pros. All my sons will know how to pack and load supergood which is the most important part aside from blanket wrapping and moving it into the truck. They will be a lightyear ahead of all the movers in the North American continent. I want to teach them the art of shipping, how to build “Tiers without Tears” (that’s a book, by the way…Old school movers manual or guide to the art of moving…Yeah its an art!) so well that the idea of sending your goods back on the Mayflower to the other side of the world would be an international moving voyage of which they could be confident to perform no matter how valuable or fragile the shipment. Whether we pack or you pack, whether we haul or you haul, we want some part of it! Thanks for reading! We look forward to packing you up and shipping you out! (Or moving you right down the street…Either way!)

El Paso County
We currently have the contract with the county. Awarded in May 2014.

Us Attorneys
Both El Paso and Las Cruces locations since 2008.

Sealy Mattress by way of Costco and HSN;
We receive at our warehouse and then deliver mattress sets for their customers. We’ve been doing that since 2013.

Saucedo Bros Locksmith
We receive and deliver safes up to 4000 lbs for their customers.

Skip the guesswork! Include some information about your upcoming move to get a free quote.